How thousands of students are getting top-notch grades

This is a number that’s always driven me nuts.

I worked 25 hours a week, taking 8 college course, while biking over two miles each day and each way for each of them. That wasn’t even an extreme schedule for me. I had plenty of time and the only time I would have considered myself busy would have been during finals. I am not extraordinarily smart. There were times when I barely studied at all. (I did develop my 15 minutes a night strategy around this time too.) I scored near the top of my class.

I did this, not because I’m super intelligent, but because I was more consistent and effective than 95% of my classmates.

When you tell someone they should be studying 6 hours a week for a three hour class, you are not going to get them to study 6 hours a week! At best, you’re going to convince them to study a couple hours out of guilt while all they can think about is how much they failed to study enough (but they’ll say to themselves, “at least I tried.”)

No teacher or educator is stupid enough to think students actually follow that recommendation. It’s insanely high in hopes that it would guilt you into a reasonable number. (While at the same time encouraging terrible study habits.)

The reality is that an average student in an average school rarely needs to study to pass 85%+ of courses. A student only has to study a few minutes a night for 10-13% of courses. That last percentage of courses does require a long investment in studying but I guarantee that telling someone they have to study 6 hours a night is one of the worst ways to try and convince someone to follow through with studying.

Want to learn how to save hundreds of hours a semester using this commonly ignored class essential? 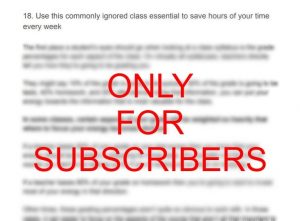 3 thoughts on “2 Hours Per Course Hour”