I was humiliated. And it wasn’t even Schmitty’s goal. He was just showing his report card because the other guys were razzing him…

They were showing off their “high” scores…

But Schmitty wasn’t like that. He was a stoner too committed to good vibes to be a show off (and quite frankly, before that day, most people just assumed he was skating by.)

I wasn’t close with Schmitty at the time. He would offer a friendly smile when he was trying to sell his “merchandise” and he was always nice about it.

But these guys were giving him trouble…

They made jokes about him. And it was well beyond the teasing for fun at that point and eventually they made the mistake that made them look like fools (and made Schmitty look like a genius.)

They asked to see his report card…

And he did it…

The guys shut up pretty damn fast after that.

And he made it sound pretty damn easy…

I’d been scoring okay grades for years using the traditional study-my-ass-off approach. I was able to get my grades well into the passing range but I didn’t expect a ton of A’s at the time.

And Schmitty introduced me to his world…

His world was a strange place where:

He introduced me to this brand spanking new world that completely skyrocketed my success and made the process fun.

Yea… literally fun. I absolutely hated school until I found this stuff out…

School became the easiest game I play. And my scores flabbergasted teachers and students that knew how little effort it took.

Some of these lessons took me years to learn. If I had learned all of this in high school then I would have been competing for the top-of-my-class without even trying. (That’s what happened in college.) Heck, I would have had so much extra time I’d probably have a killer life outside of school too.

In the members only area, I teach all the secrets I learned from this stoner sitting in the back of the class. (And believe it or not, this stuff is backed up by modern science.)

My name is Aaron Richardson and I’m the founder of Smart Student Secrets. I’ve written 5 books on studying and hundreds of articles that you’ll find all over the web. My most important and influential book is How To Kick-Ass In Class.

Some of what the readers think:

Thank you for the email. I just downloaded the E-book. May I share it with my postsecondary class in August? I think it would help to get them reacclimated to studying. Most will have been out of school for some time.

Just finished reading it and after imagining the feeling that I would get after getting the results I really deserve my face changed, I started smiling with my eyes closed.

I appreciate the information, and promise to both you and myself to change my current grade, to not settle for less, to become a high achiever.

>From the bottom of my heart thank you,

In the members only area, you’re going to enjoy the weirdest study secrets that nobody else is talking about. (I’ve got messages from insiders calling me crazy for being willing to share this stuff. Revealing this stuff tortures academics that make a living making stuff over-complicated.) 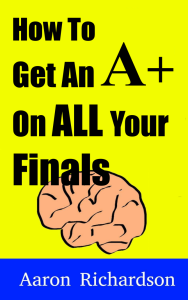 How To Get An A+ On ALL Your Finals

This book is the solutions I used to create some killer end-of-semester blowouts in college. I took advantage of some little known tricks that made scoring high almost automatic.

This ebook is only going to be available for another week or two. (I can’t even guarantee it will last that long.) We’re preparing for the new school year and that’s coming soon.