Some people can spend weeks looking for a good essay topic to write about.

It can take a while. It can be a little bit stressful. It can feel like every word you write is wrong and every paragraph you wrote isn’t making the point.

But a good essay topic can change that.

Do you know what I’m talking about?

If you’ve ever had the pleasure of coming up with a killer topic for your paper and getting to write about it then you probably know what I mean.

When you have it, you can just start typing and it’s almost like it’s typing itself. You sit down. You start typing. Then the words just flow out of your fingers as if you’re telling the story to a close friend of yours that’s leaning in and nodding intently.

Writing good topics can feel like you’re hardly doing anything at all.

It can even make you feel good. – Maybe I’m just a dork but I’m dead serious.

Here is some advice you’ll probably hear the exact opposite of from most people:

Don’t Write For Your Audience!

And yes… there are exceptions to this but stick with me. It’s important.

Most people SUCK at writing for their teachers.

When students try to “write for their audience,” they end up assuming their teachers are super boring people that don’t have any sense of wonder or humor or anything good. So the student writes a super boring paper. The student doesn’t enjoy writing it. Then the teacher doesn’t enjoy reading it. It’s pure misery even when it scores high. Everyone hates the paper.

Well… your teachers probably don’t enjoy boring stuff either. Sure… they may give you an okay score because you met the assignments requirements but they aren’t going to like it.

If, by the end of your paper, you can get the teacher smiling, laughing, or going “WHOAAA?!?” then you’re going to get a good score on the paper. More importantly, both you and the teacher are going to enjoy the process more.

It’s usually smarter just to write for yourself (and adjust it later for your teacher.)

If you think something is interesting, fun, or awesome then:

So… don’t worry about making your teacher happy.

Sure… you can edit out the stuff that’s unacceptable to hand in later. For now, focus on a topic that interests you.

If you can pick from just about any topic in the world then focus on picking a topic that you’re already interested in.

If you know nothing about the Roman Empire then don’t just think… “Rome seems cool. I’m going to write about that.”

But if you’ve been doing a bunch of things about Rome for fun then that’s the perfect topic.

It’s easier to jump on a wave that’s already there than trying to find some wave of interest that you haven’t seen yet.

The more you know about a topic already, the easier it’s going to be to roll with the topic later.

This is particularly important if you’re working on a research paper. If you know about the topic enough then you can virtually write your paper and fill in the sources later. (Though that is bad practice.)

Pick a broad topic before you try to dig into the details of your thesis.

The Most Interesting Thesis You’ve Ever Written

The thesis of your paper is important. It’s the lifeblood of your essay. It’s the main thing you’re spending all your paper trying to maintain. The thesis can make or break your paper.

A boring thesis will encourage you to write a boring paper.

“Religion was important in the history of Rome”

“The Roman Republic was militaristic”

“Constantine was a great Roman ruler”

Look… I like Roman history but I probably wouldn’t want to read a single one of those papers. They’re just boring. Odds are, your teacher isn’t going to want to read them either.

Hint: notice how safe they are. Those theses probably can’t be proven wrong. That is part of why they’re so damn boring. It’s usually better to be interesting and wrong than boring and not wrong.

Now check out these topics:

“The Roman Republic caused more devastation than all the Roman Emperors.”

“Constantine was the greatest Roman ruler.”

These topics can make anyone mildly interested in Rome a little bit curious because they’re actually saying something specific.

Compare the first two for a clear distinction…

“Religion was important in the history of Rome”

The key difference in these title’s is “was important” vs “would have collapsed 1000 years earlier.”

The person writing the second essay could easily just replace the good second title with the crappy first essay and he’d cut readership by 99% and have her reader taking a nap by the time they start reading.

The second title is making a specific claim. The first one is making such a broad claim that it hardly qualifies as a claim.

But when possible, you want to go even farther than specific.

You want to find a hook.

If you pick a really good thesis then your reader is going to dive into your paper like they’re on fire and jumping into a swimming pool.

One of the easiest hooks you can use for an essay is to write something absolutely crazy as your thesis.

“Why being lazy is better than being hard-working”

Look at that topic…

Does it sound a little crazy? It’s kind of the exact opposite of what most people tell you. So… that’s a reasonable hook that can drag the reader in a little bit.

But if you’re willing, you can make it even crazier than that…

“Living on welfare is smarter than becoming a millionaire”

You can say something that’s a little bit offensive to some people. (Of course… in school… be careful with this strategy.)

“No one should ever eat peanut butter sandwiches without jelly”

What? That’s a ridiculous topic… How could anyone write a full paper on that topic?

Exactly! If you can write that paper then it would give your teacher a laugh. That’s another hook – being a bit silly. – Though you’ll need to use it appropriately based on the assignment requirements.

This Last Short Paragraph Is Super Important So Actually Read It

Take note of what I’m not mentioning in this article. Your topic doesn’t have to sound smart. It doesn’t have to be right (you just need to make a good case that it is.) You don’t have to believe it. And the teacher will probably find it interesting if you do.

Now… go take a shower and think about your topic. Trust me… the details come to you easier in there.

How To Create An Essay Topic – That Makes Writing Feel Automatic 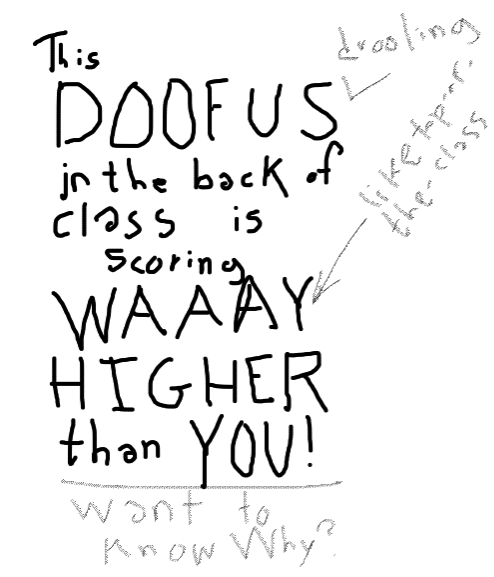