Skip to content
Get Better Grades While Enjoying The Studying Process

This article was inspired by a question I received from a reader. He pretty much asked the question: “Why do my friends get better grades than me when I focus on them way more?”

I had that experience myself. I remember looking at certain students who looked lazy, stupid, and unfocused. Somehow they still got better grades than I did.

I worked my butt off just to keep up with these students.

I had almost no personal life while they enjoyed hanging out with their friends every night. I couldn’t understand why it was so easy for them.

That is why I got into learning how to study better. I was wondering how my friends could be getting better grades while doing less.

Asking why your friends get better grades than you is a complicated. There are hundreds of different reasons. There are the obvious reasons:

In reality, it doesn’t even matter if they’re smarter than you.

There are a wide range of IQs. IQs aren’t everything. I’ve met super smart people that ended up complete failures in life (at least to the outside world.) The thing about this factor is that it’s not too related to grades.

The grades a person gets in school and their IQ is not well correlated. It plays a role but there are plenty of major exceptions to those correlations.

Many high IQ people get terrible grades in school. (This is usually because they don’t care about it.) Many low IQ people get straight A’s through school. It  comes down to factors completely unrelated to their IQ.

Intelligence could be a factor but it’s not most of it.

So, your friends could have just got a little lucky in the intelligence department. Maybe they fell off the smart tree and hit every branch on the way down.

We’re all lucky in some way or another.

It could be but, more likely, it’s something else.

There is an old clichéd story in television and movies. The story is about a typical bad student trying to become a good student.

This story irritates me because it’s making a wild and false assumption.

Good students don’t study all that much more than bad students.

I have met only one or two people that study for hours every night consistently. Those people study in ways only tangentially related to their school material. The vast majority of students, including high scoring ones, don’t study in any extraordinary way.

Studying more than someone does not mean you’re going to score higher than them. In fact, too much studying could easily reduce the amount you learn by increasing the stress.

You can’t assume that the amount of time a student studies is an essential factor. (Of course, zero study time versus any study time is a big difference.) S

Your friends may be getting better grades than you while studying less.

One thing that I deduce from this question is that the person is worrying too much.

If you’re worried your friends get better grades than you then you may be stressing out a little too much over it. It doesn’t matter who scores highest in most situations.

Worrying about it will just hurt your grades.

In this blog, I teach strategies to help study in less than 15 minutes a night. These students could have stumbled on these same ideas to learn extraordinary amounts of information in tiny amounts of time.

Perhaps your friends are scoring better because you’re doing it wrong.

My Best Advice: Ask Them DAMMIT!

If you’re still curious how your friends are getting amazing grades while you are just getting by then just ask them about it. 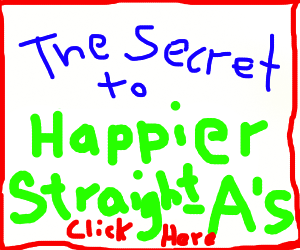 There are rude ways you could ask but there are plenty of polite ways to ask. Just tell them how much you study and ask how they keep up with it all. You might be surprised to learn that it’s not as simple as it looks (usually it is.)

Some students study significantly more than they make it appear to the rest of the world.

Most people study while they’re alone. That means no one knows if they’re actually studying or if they’re just hanging out alone. That hour a night you watch TV, they could be using it to study. Little factors could easily hide effort from the rest of the world.

Some students will talk about how they don’t really study at all. That’s okay. This may surprise you but some people are good at not studying at all. Those are the people I’ve learned some of my greatest study lessons from.

I use studying to get grades I’m proud of but I can still learn lesson from people that have the skills to survive without it.

It doesn’t matter what the grades of people around you are unless you’re competing for some very very difficult goal (I’m talking MIT style.)

If you doubt that then ask them and see if they can teach you anything. Sometimes, they can’t.

If you’re worrying about this then you need to reevaluate your priorities a little.

Why do you want good grades?

Is it just a silly competition or are you trying to learn information that will help you in life?

If it’s a silly competition then don’t stress about it. If you’re just trying to prepare for life then grades aren’t your problem. Grades are only one way to represent knowledge. You may know more but just not know what’s on the test.

The next time a student sends me a message saying, “my friends get better grades than me,” I’m going to send them to this article in hopes they’ll get this message: Chill out!

Really… life is too short to worry about factors that are so far out of your control. Just be happy for them (or secretly choose to believe they’re sleeping with the teacher.)

Now that I’ve got the mature answer out of the way… you might want to check out How To Crush Your Friend’s Grades in the members only area.

My Friends Get Better Grades Than Me!?

16 thoughts on “My Friends Get Better Grades Than Me!?”