You’re probably already familiar with the problem. You’ve seen it in commercials for years now.

Sure, most commercials are bold and make stupid claims. I’m talking about the kind of commercials that take it way overboard. They try to get you to call a number to buy in less than 30 seconds of commercial. They’re called hard sell commercials.

This actually has a lot to do with studying.

That’s not the only problem there is though. Studying can lead you into some pretty tough hard sells. The sad truth is that most students do end up making major mistakes.They end up spinning their wheels in these ruts for years into the future and they never come to realize why.

Ultimately, this article is about patience and studying. How much patience is appropriate and how much is too much? (Because no one wants to waste their time with something that doesn’t work.)

In each one of those hard-sell commercials, you’ll hear bold claims. In that vacuum cleaner commercial, they might say, “You can clean your home in half the time!” Or in a facial cream commercial, it might say, “Your acne will be gone in less than 1 week!” Whooaaa… Awesome right?

Of course, most of those claims are bunk. Sure, they may have a thread of truth in them. It may be possible to have those results but they aren’t the typical situation. In most cases, those products will (at best) just show a small improvement to the norm. But… of course, no one calls random phone numbers looking for small improvements to the norm.

With studying, you need to remember that.

When you go for fast results or big results you’re likely not getting exactly what you want. There are two typical problems:

1. These strategies usually aren’t as predictable.

2. They’re often sacrificing some other factor that you might not have considered in the past. (Maybe your grades will go up in the short term but if you forget the information after the test, it can hurt you in the long run.)

This is the trap that many “bad” (I use that word as a cliche but I’d prefer some other word) students fall into. Sure, many of these students study. They aren’t consistent about it but they try studying regularly.

When they do study they often study with a whole lot of effort. Then when they don’t see instant results, they end up killing their own motivation and giving up at it.

Traditionally “good” students tend to have the opposite problem.

If I just keep banging my head against this wall, someday, I might just break through it.

This is the basic strategy applied by many good students.

They’ll spend an hour a night studying. During that study session, they won’t feel any positive results coming. After the session, they’ll feel like they’ve learned virtually nothing. That’s partially true.

Despite that feeling of failure, they just show up the next day and do the exact same study strategy.

They don’t consider their results in their study process. At best, they’ll just increase their study time to get better results.

It’s true that this works. It works out of plain stubbornness. If you stare at the same page of information daily, eventually, a portion of it is going to stick in your memory. It’s a completely inefficient at this process. You could have gotten the same results in fractions of the time but instead, you wasted hours.

This is what I call the no results mentality.

It’s this idea: no matter how bad you felt your strategy worked, it just needs more time investment.

The strategy used to study is never to blame. It’s always the person using that strategies fault. (f/e “I didn’t focus enough,” or “I didn’t study long enough.”)
The no results mentality drives me crazy. It drives me crazy because typically the students suffering from it are smart in the traditional sense.

These are students have the world at their fingertips. They just let their brains rot away as they attempt to learn random facts that they could have learned in half the time.

(That’s not to disparage the “bad” student. I still consider myself a “bad” student despite my good grades. It’s just to say, on average, this might mean something.)

Instead of utilizing memorization strategies like the ones taught on this blog (the memory strategies can be found here) they focus on  ineffective methods.

The Precarious Balance Of Patience

This is, unfortunately, not one of those problems that I can give you a prescription to solve. I can’t just say, “try a strategy for three weeks, if it doesn’t show good results then stop it.”

I can’t say that because every strategy requires a different expectation of results. Some strategies would take you months to see results.

Other strategies should show results in days. None of these strategies are particularly better than any other. They just have different priorities.

If we were talking about the strategy I recommend through this blog (15 minutes a night with a few caveats) then it took me about a week to start feeling like it was working.

I wouldn’t be surprised if it took 2 or 3 weeks for some people to see results. Past that, I’d assume you’re missing something important and should reassess everything.

When you’re considering a study strategy, you need to make estimated time requirements yourself. You need to look at how strange the study change would be and then estimate when you should see results.

I recommend you do this before you even try a new study strategy. Tell yourself, “I’ll wait (however long) before expecting results. If I don’t see results then I will stop using this strategy.”

By planning in advance you won’t get caught up saying, “I’m almost there” for weeks at a time.

This is just something you need to keep your eyes open for. If you catch yourself expecting results too fast or too slow then it may be time to start thinking about a change in your study routine. 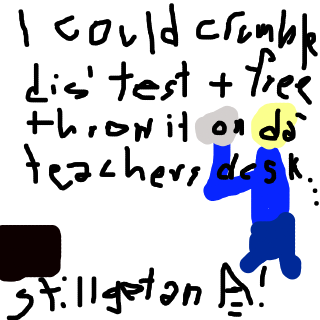 12 thoughts on “Patience And Studying”