How thousands of students are getting top-of-the-class grades

I’ve been trying to pick up German recently. I’m in a German class but it’s more than just for class. I would genuinely like to learn German for a trip I’m planning to take after graduation. That being said, I’ve been struggling to find an effective strategy for picking up the language. Have you mastered a second language? If so, what do you think is the best language learning strategy?
-Adam

I wouldn’t say I mastered a second language but I have become reasonably proficient in a couple. I certainly wouldn’t impress any locals but I would be able to communicate. The most interesting aspect of my language learning history isn’t the depth of my knowledge but the absolute lack of investment I made to get that depth of understanding. I’ve invested less time studying languages than 90% of students that have reached my level. That’s because (short of a few early classes that I got almost nothing from) I’ve focused on using only highly efficient strategies for learning.

There really is one super effective strategy for learning languages but accessing that strategy isn’t easy. I think about language learning in two steps. The first step to learning a language is the hard part.

The first step to learning a language is plain old brute force memorization. You need to find some ways to reach a basic level of proficiency in a language. These strategies are almost exclusively about finding good ways to memorize the information you’re learning. Since they’re almost purely about memorizing information their typically extremely tough to follow through with. That being said, you can’t move on to step two until you’ve spent a good amount of time in this step.

Once you’ve learned somewhere around a thousand of the most common words in a language, ideally closer two thousand, you begin to gain access to the second step of memorizing languages.

Yes… You’ve probably heard of this strategy a million times.

Most people that discuss immersion fail to discuss the fact that it’s locked off to 90% of the students trying to learn a language. Immersion in a language is almost completely useless until you gain a significant vocabulary in that language. Don’t waste your time immersing yourself until you’re proficient because it’s going to be significantly more stressful than it has to be.

By immersion, a student can use partial or full immersion. Most people learn their first language through full immersion. When you were a child, your parents taught you to speak by just speaking in front of you day in and day out. After a few years of complete immersion you started to get a grip on the meaning behind the words. This can be imitated, to some extent, by spending time immersed with people speaking the language you want to learn. That’s much easier said than done.

If you’re looking to master a language then partial immersion is one of the most practical and effective strategies you can use. While you can’t immerse yourself in most subjects like history or science, language is one of the most immersive subjects in the world. Once you start to practice immersion regularly you’ll find yourself even beginning to think in your second language. It is the absolute best language learning strategy.

Do you want to know how to study in less than 15 minutes a night and get better grades than 90% of your peers? That’s what this blog is all about. Be sure to follow along and check out the archives. Also, check out the ebooks in the sidebar for more tricks your teachers won’t tell you about.

The Non-OCD Approach To Academic Organization 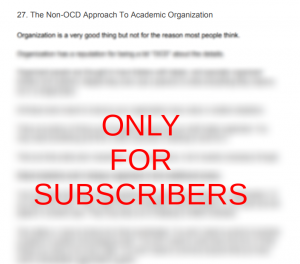